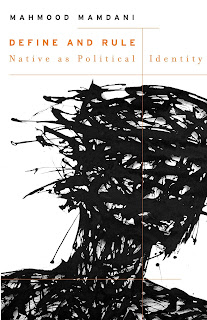 Define and Rule: Native as Political Identity (Wits University Press) by distinguished Ugandan academic Mahmood Mamdani is a quintessential postcolonial text. It is a worthwhile contribution to the vast body of scholarship that - put simply - challenges the authority of colonial intellectualism and knowledge, and examines the lingering effects of imperialism on formerly colonised territories.
In this book, Mamdani discusses how the identities of indigenous peoples (tagged "native" and "tribe") were formulated ideologically and invested with enduring legal and cultural force on the basis of bogus anthropological and ethnographic theories that served the selfish political interests of British Indirect Rule. The book's title - a pun on the political catchphrase, "divide and rule" - reflects one of Mamdani's main didactic objectives: to demonstrate, practically, how the actions of colonisers are responsible (at least in part) for some of the endemic social discords that continue to plague the formerly colonised world.
This small book (only 154 pages, including long notes and an index) has three chapters, the first of which is titled Nativism: The Theory. Here, Mamdani focuses on the intellectual work of Henry Maine, a 19th-century English jurist and historian whose ideas, according to Mamdani, strongly influenced the policies and practices of British colonialism during the crucial period of the mid- to late 1900 '0s.
During this time, the British empire experienced uprisings in India (1857) and Jamaica (1865) that indicated, in Mamdani's words, "a crisis of mission, and a crisis of justification", and that resulted in the reconsideration of the colonial enterprise "from civilisation to conservation and from progress to order". Mamdani claims that the theories offered by Maine were central to the reorganisation upon which indirect rule was founded.
A key implication of these ideas, Mamdani demonstrates, is the definition of indigenous peoples, or natives, in terms that are essentially oppositional to settlers. Thus, "if the settler was modern, the native was not; if history defined the settler, geography defined the native; if legislation and sanction defined modern political society, habitual observance defined that of the native". To account for this conclusion, Mamdani devotes the bulk of chapter one to detailed analyses of various aspects of Maine's lectures and writings on indigenous Indian history, customs and laws as well as the latter's reflections on the history of human civilisation and the empire's administrative crises.

These ideas are expressed mainly in Maine's better-known works, including his 1871 collection of lectures, Village Communities in the East and West, and Ancient Law, published in 1861. Mamdani quotes generously from these texts, which contain many typical examples of the denigration and misrepresentation of formerly colonised peoples by imperial historians and ethnographers. These also reveal some of the now-disproven assumptions and powerful truth claims that underpinned colonial epistemologies and ideologies.
In the second part of this chapter, Mamdani analyses how the foregoing descriptions of white versus non-white cultures correlated with Maine's second theory, which similarly casts customary laws in opposition to civil laws.
Mamdani argues here that the import of Maine's theory is "the duality between two kinds of laws: culture-free in the West, and culture-bound outside it and, based on this legal duality, two kinds of societies: progressive and stationary".
This idea became reflected in the 1858 "doctrine of non-interference" and the dispensation of protectorates, whereby the imperial power assumed the prerogative to define and delimit what would be "customary" and what would be "civil" in virtually all aspects of life including religion, boundaries, laws, institutions, and citizenship.
This, in Mamdani's view, underpins the ideological cornerstone of the new, post-1857 approach to colonial governance; one by which social and cultural identities and differences were not only shaped, but also politicised, institutionalised, and sometimes even created within colonised societies.
The inevitable effect of the legal enforcement of this new form of jurisprudence in India is highlighted by a remark that Mamdani cites: "This sealed the division between Hindu and Muslim, and in addition broke the Muslim community into its constituent 'sects', each with its own code of law." He goes on to provide further examples from Malaya, and Dutch-controlled Indonesia where colonialists introduced similar divide-and-rule tactics.
Chapter two, titled Nativism: The Practice, promised, on the face of it, to demonstrate how the theories analysed in the preceding chapter were translated into administrative and social practice. The book does not do this fully, although Mamdani makes repeated gestures towards this objective.
Instead he provides a fascinating analysis of the political and legal origins and dynamics of racial and tribal identification during indirect rule as well as their enduring legacies in the world at large, and in shaping social relations in Africa in particular. Here he repeats, in concise form, the core ideas expressed in his 2004 book Keywords: Identity.
This section is followed by a rather long (and seemingly tangential) survey of various models and versions of ancient African history. While this is also insightful, it seems to obstruct the flow of analysis from theory in chapter one to an expected explanation of practice in chapter two.
Mamdani returns to the distinction between race and tribe in a short section titled Tribalising as a Political Strategy, where he argues, among other things, that although the idea of the tribe as "an ethnic group with a common language" existed before colonialism, it certainly (author's emphasis) did not exist as "an administrative entity that distinguishes between natives and non-natives and systematically discriminates in favour of the former and against the latter".
This argument is taken forward in the final chapter, which discusses responses by intellectuals and politicians in decolonised African states to colonial categories of group identification. The author cites research by Nigerian scholars whom he identifies as forerunners of "alternative historiography" of race and tribe in post-independence Africa. The work of the historian Yusuf Bala Usman is elaborated in some detail. Mamdani refers copiously to Usman's incisive critique of the biases and weaknesses of colonialist history-writing and ethnography, showing that they largely sought "to justify the prejudice that African society was stagnant and that all change" came from outside the continent.
Importantly, Usman is shown to counter, convincingly, the prevailing idea that the identities, conflicts and political evolution of African peoples has been predominantly determined by ethnicity. His study of various parts of contemporary Nigeria shows that, beyond kingship, factors like language, residence and occupation have historically played crucial roles in defining pre-colonial identities and political organisations, and that most ethnic categories today - notably Hausa, Yoruba and Igbo - were "actually created in the formation of the colonial state in Nigeria".
The book ends with a section titled Nationalism and Statecraft in which Mamdani demonstrates how the burdensome legacy of colonial identity construction can be dismantled. He begins by noting that early nationalism failed to achieve this important goal, partly because "nationalists were seldom willing democrats". He mentions George Washington, Indira Gandhi, Robert Mugabe, and Kwame Nkrumah. He also names Julius Nyerere, whom he nonetheless credits with the successful, and considerably peaceful, scrapping of the divisive legal and administrative system bequeathed by imperialism. In Mamdani's view, Nyerere's achievement includes the establishment of "an inclusive citizenship" in Tanzania. This, Mamdani maintains, is critical to the realisation of social justice and political stability in Africa.
Apparently targeted primarily at academics (especially students and scholars of African history and literature), Define and Rule is also a worthwhile read for those with a less intensely intellectual interest in contemporary African society and politics. The book's historical surveys have touches of epic romance and intrigue; the polemics on identity formation are insightful and stimulating and as arresting as a well-presented political talk show. - published July 21, 2013