"Apartheid era literature has been oversimplified"

The period since liberation has allowed a number of new perspectives, themes and possibilities for expression to emerge in South African literature. In the immediate political sphere, many noteworthy literary figures have, since liberation, suggested that the days of the “bring-on-the-poet-to-lick-the-stage-clean-for-the-politicians” phenomenon (to use Lesego Rampolokeng’s phrase) are over; while others, such as cultural activist Vonani Bila, have lamented the “clowns” who are still prepared to perform work of uncritical flattery for politicians. In addition, there has been an explosion of genres more concerned with entertainment, such as crime, teen and fantasy – one of which, crime fiction, has instigated fascinating discussions about its potential for highlighting socio-political problems.
From the perspective of literary studies, though, we appear now to be in the process of entering a new, post-transitional phase in our history, marked by a renewed interest in so-called “protest” literature and discussions about the viability (or not) of certain genres as bearers of the “political”. This renewal of debate has, of necessity, highlighted misconceptions and omissions in our understanding of our critical priorities to date. One of these is the relative lack of interest in an important period in our literary history: the two decades preceding liberation.
To a majority of literary commentators, the cultural and literary concerns of these two decades were made redundant by the demise of apartheid. This has resulted in a tendency to present this period in a remarkably uniform way, both in the media and in universities which teach South African literature. The general impression given is that these years were unspeakably arid; chiefly because most writers were engaged in various kinds of “support” activity to anti-apartheid organisations, and had little interest in questions of craft, skill or style beyond these dictates.   Any suggestions that there were socially conscious writers and performers who were not so circumscribed, have tended to be ignored.

In The Institute for Taxi Poetry (Umuzi) Imraan Coovadia presents us with a university department where "taxi poetry" is studied, and with the hundreds of minibus taxis on the streets of Cape Town, whose "sliding door men" aggressively collect fares and generally rule over the passengers. These minibus taxis may have the poetry to which the title of the novel refers painted on their sides, yet when poetry is quoted within The Institute for Taxi Poetry, it is on three occasions from within the recognised canon of South African poetry, the authors being //Kabbo, a nineteenth century San convict (translated into English by Stephen Watson), Karen Press and Douglas Livingstone. Coovadia does quote one of the revolutionary black poets, Keroapetse Kgotsile, to attribute his line to the taxi poet Gerome Geromian, and the epigraph to the novel is taken from Mongane Serote's City Johannesburg. Poetry permeates our lives, these allusions say; it formulates for us what we think - but probably nothing more specific than that.
Solly Greenfields, "once a taxi poet, and then a Buddhist, once a Muslim, once a Jew, once a lowly cook in the Mount Nelson? on other occasions a guest in the very same hotel", whose murder by an unknown assailant stands at the beginning of the novel, is the catalyst for the plot - which is arguably the weakest part of the novel.

The White Side of Life 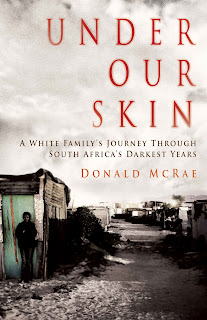 Donald McRae left SA (to avoid military service) in 1984 and has made a successful career for himself in the UK as an award-winning writer and journalist. In Under Our Skin: A White Family's Journey through South Africa's Darkest Years, he turns from the worlds of professional boxing (Dark Trade, 1996) or boxing and athletics and politics (In Black and White, 2002) or the drama of the world's first heart transplant (Every Second Counts, 2006) to write about the drama of his own life. McRae brings to bear his skills as researcher and journalist to produce an honest and dispassionate autobiographical account of what it was like to grow up white in SA in the years when apartheid was at its height. It is an unassuming and absorbing story, although much of it may be familiar - at least for an SA reader.
The central theme is its exploration of what it meant to grow up in a privileged white cocoon in the heyday of apartheid - a central trope of much SA writing. This means it is also a coming-of-age story, a story of the gradual loss of innocence as young Donald's eyes are gradually opened to the nature of the world around him. As with many such stories, there is the awkwardness of adolescence and of first sexual encounters (the more significant of these often involve crossing some cultural or racial line, hence the book's title) - but do not expect anything erotic or even confessional. Despite the personal nature of this memoir, there is a restraint in the telling: there is little sustained introspection, and little sensory detail.

Read more »
Posted by Mary Corrigall at 07:57 No comments: 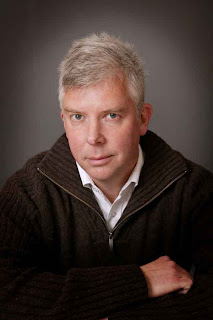 What was the main challenge in writing Under our Skin?I've written six previous non-fiction books - with subjects ranging from pioneering heart surgeons and criminal lawyers to sporting icons and sex workers - and each was underpinned by years of detailed research about larger-than-life characters. It was a rather tricky challenge to place myself and my family at the heart of this very different book. But Under Our Skin is also meant to be a memoir of a particular era in SA from the mid-1960s to the mid-1980s.

Are you satisfied with the end product, do you have any reservations about it, would you do anything differently?The book has, at least so far, been generously received. But I'm not sure if I quite got the balance right between the "good stuff" and the more overwhelming "bad stuff" of life in SA during that very different time. As a writer, I'm inevitably drawn to more dramatic and often harrowing memories. Perhaps I should have included more on the sweeter days that also shaped our past. However, it was important to me that I devoted an entire section to the detention and death of Neil Aggett in 1982. So I wouldn't change too much if I had to write it again.

Read more »
Posted by Mary Corrigall at 07:56 No comments: