Caught in the Underbelly 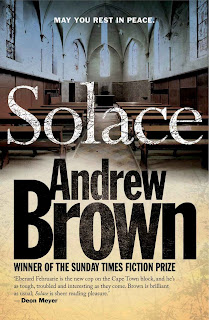 Eberard Februarie never wakes up in the morning feeling refreshed. His skin is dry and taut, his muscles ache and he typically surveys the dystopian world he inhabits with pounding in his head, a consequence of his penchant for night-time booze-ups.
This sense of physical degradation doesn't simply mirror the debased crime-ridden society he encounters as a member of SAPS but is an external manifestation of the inner impact of his profession.
He can't lift the lid on the agony that haunts the deep recesses of his consciousness; if he did, he would fall apart and would no longer be able to survive or weather the abysmal realities that his job puts him in contact with daily. As he wades through the dark trenches of the world of crime, his corporeal character is weighed down by the truths he cannot face and the toll of a lifestyle, which ironically is supposed to counter it.
As a cop tasked with solving violent crime, he is the buffer between society and its undesirable underbelly, but in a morally corrupt society, where the boundary between right and wrong keeps shifting, Februarie has lost his way. He seems more at home among the debased.

Read more »
Posted by Mary Corrigall at 04:05 No comments: 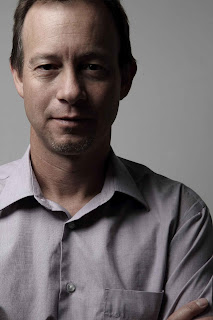 What was the main challenge in writing Solace?The biggest challenge was venturing into the arena of religious differences and fundamentalism, setting the novel within this contentious environment without being offensive or overly insensitive to other people's beliefs and cultural practices. Some religions are more sensitive to criticism or debate than others and all three mainstream religions come under scrutiny in the book. I think that I may have annoyed a few people on the extremes, but the response to the book has been overwhelmingly positive.
Are you satisfied with the end-product; do you have any reservations about it, would you do anything differently? I had reservations when writing Solace about repeating a character, in this case Detective Inspector Eberard Februarie from Coldsleep Lullaby. I don't want to be a series writer or to fall into the trap of formulaic writing, so I was extremely ambivalent about dusting the mothballs off him and putting him back into action. On the other hand, he is a character that I like and he fitted the bill perfectly for the main protagonist in Solace. It also allowed me to develop him further as a character (in this case, taking the poor man to even lower emotional depths). On reflection, I think it was the right thing to do for the book, but I am reluctant to make Eberard a regular feature.

Read more »
Posted by Mary Corrigall at 04:04 No comments:

Life versus Art: Lessons in Husbandry 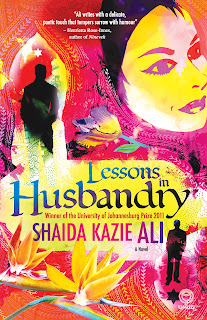 LESSONS in Husbandry (Umuzi), packed with incident as it is, resembles life rather than art in that it contains a large diversity of matter, no part of which necessarily relates to any other part.
The main theme, which resurfaces frequently in Shaida Kazie Ali's novel, is Malak's grief for her sister Amal, who disappeared 10 years previously, immediately before her marriage to Taj, and has never reappeared.
Taj, already provided with a marital home but lacking a bride, asks Malak to marry him in place of her sister. Husband and wife are each other's unsatisfactory substitutes; their marriage is childless and Taj is unfaithful - though generous.
Malak, in this up-to-the-moment work, has a share in a cupcake business. But does her business partner have to be a Holocaust survivor who tells her story? Does she have to meet an old friend who is now an anorexic model? Isn't it trivialising of the whole to include so much?

Read more »
Posted by Mary Corrigall at 03:49 No comments: 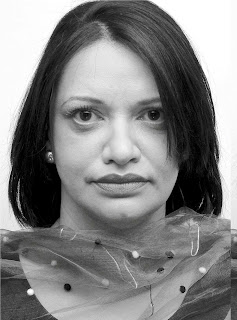 What was the challenge in writing Lessons in Husbandry?I loved writing the first draft but the challenge was learning to trust the story and let go of the preconceived ideas I had about how the plot should develop.
Are you satisfied with the end product? Yes. Probably. I doubt that I'll ever be pleased with a final draft. If there wasn't a publishing deadline, I'll write revisions forever.
What drove you to write the book and what do you aim to achieve with it?A vignette near the end of the novel kept materialising in my mind and it intrigued me because I didn't know how the two characters in the scene had arrived at that point. I wrote back to the beginning of the book to unearth the background to the story but I found the writing process was one that was filled with surprises.

Read more »
Posted by Mary Corrigall at 03:45 No comments: