In an effort to share books and encourage Sunday Independent readers to do the same, we are offering three readers the chance to win a book hamper courtesy of Penguin Books SA.
Each hamper contains three new titles from the publisher: Thinking up a Hurricane is a unique coming-of-age memoir and Martinique Stilwell’s recounting of her true-life gypsy |childhood. Dangerous LIfe by Ben Okri constructs a vivid picture of Nigerian life.
Internationally acclaimed writer Nuruddin Farah’s Crossbones is a tense and moving portrait of individuals cast against overpowering social forces.
To win the hamper send an e-mail explaining how you have spread the word about books during this past week, whether through donations to your local library or to someone you encounter or know.
Include your full name, postal address and cellphone number. |Send your entries to mary.corrigall@inl.co.za by September 21.
Posted by Mary Corrigall at 05:18 No comments:

Settler of a different kind 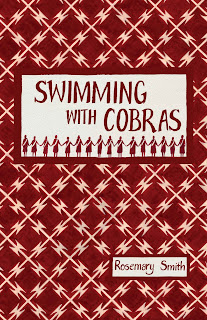 SA letters has found a fresh, new voice. Rosemary Smith's memoir, Swimming with Cobras (Modjaji Books) covers just over 30 years of a very active life, from her arrival in Grahamstown as wife of a newly appointed English lecturer, to her "retirement" in 1999. This rich and interesting narrative is several things at once. Most obviously it is record of years of dedicated service for the Grahamstown Area District Relief Association and the Black Sash in Grahamstown.
It records how the shifts in the national political arena - from the Soweto uprising to the repression of the mid-80s to the beginnings of the thaw in the late 80s - were registered at the local level.
More than this, however, Smith's memoir records how the drama of alienation and integration played out in her own life, and how her political/welfare work was instrumental in finally making her feel a part of this small Eastern Cape town with its quasi-colonial society. It vividly records her initial discomfort and sense of alienation: the unfamiliar Eastern Cape landscape was a far remove from the "manageable scenery of Oxfordshire" and for some years she continued to feel "the strong seductive pull of English life". This recalls the sense of estrangement felt by many of the original 1820 Settlers: as with them, so here the green fields and country lanes of England form a kind of counterpoint against which to measure this unfamiliar new land. The book shows how a principled lifelong commitment to non-racialism, peace and justice enabled the author to find her feet - and her sense of herself.

Read more »
Posted by Mary Corrigall at 05:12 No comments: