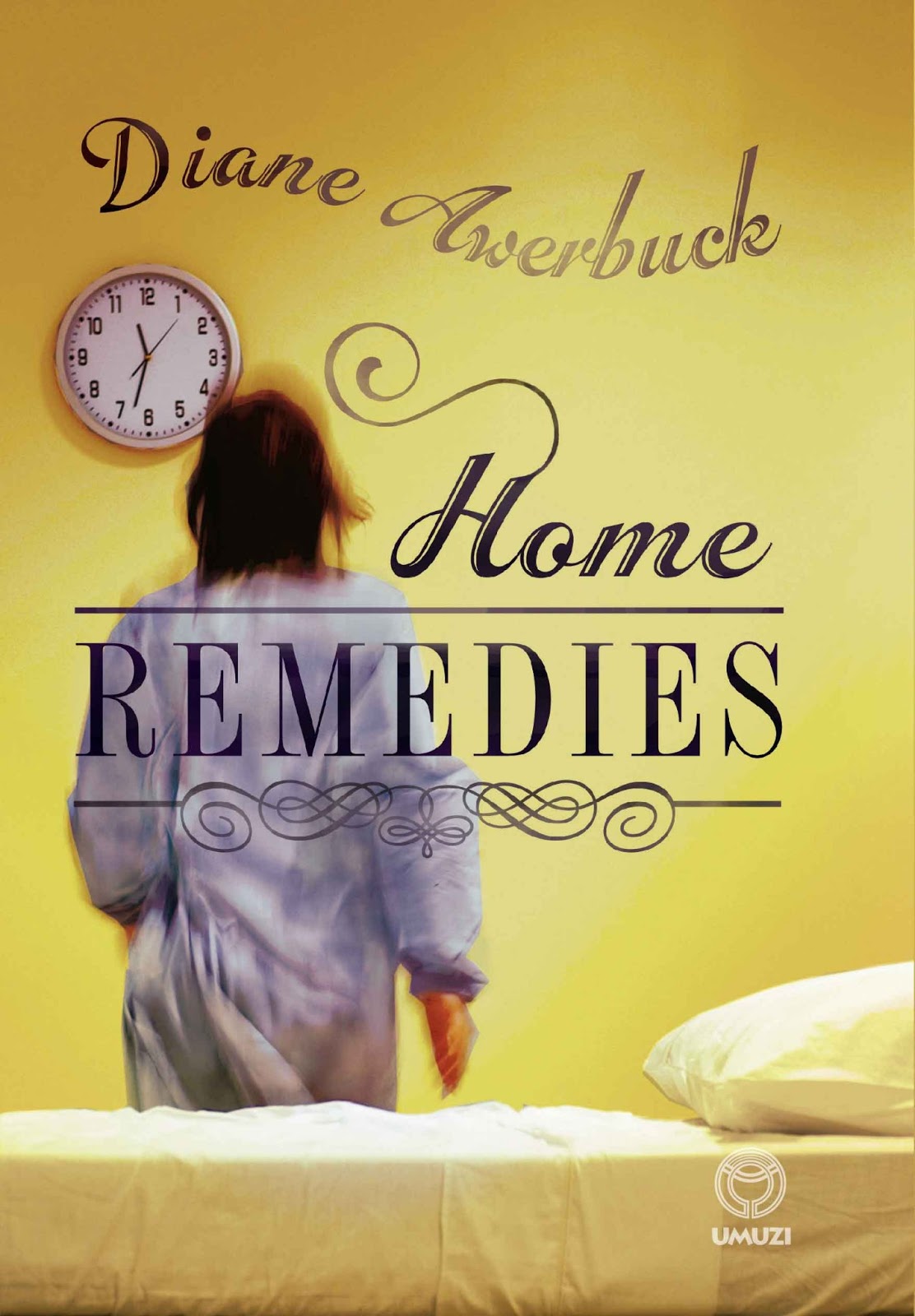 By Mary Corrigall
There comes a point in Diane Awerbuck’s Home Remedies (Umuzi) when you become disinterested in Joanna Renfield, the main character.
It may have something to do with the fact that Joanna detests herself and her banal, domestic existence. She is a mother trapped in a loveless marriage and, as is to be expected, her identity has undergone a crisis since giving birth to her son.
Her ever-expanding “writer’s bottom”, as her husband affectionately calls it, has caused her to detach herself from her corporeal being, too. She has also lost touch with her sharp, former self; a highly educated researcher and writer.
But this persona hasn’t been completely discarded; as she lingers on the periphery of her consciousness in the form of an alter ego voice dubbed Dr Renfield.
Dr Renfield is there observing, passing judgment on her life, highlighting the ironies, encouraging Joanna to retain the details, as if the minutiae are important material for a literary project.
Dr Renfield reminds her that her mundane existence could have purpose, or could be justified as a necessary “sacrifice” at the altar of art.  But can Dr Renfield save her from the persistent suburban ennui that has engulfed Joanna?
Or is her alter ego the obstacle to  her fulfilment as a mother? It’s a role Joanna struggles to reconcile with. ”It was a blessing, it was a curse,” she says of the contradiction that thwarts her efforts to claim a fixed position. 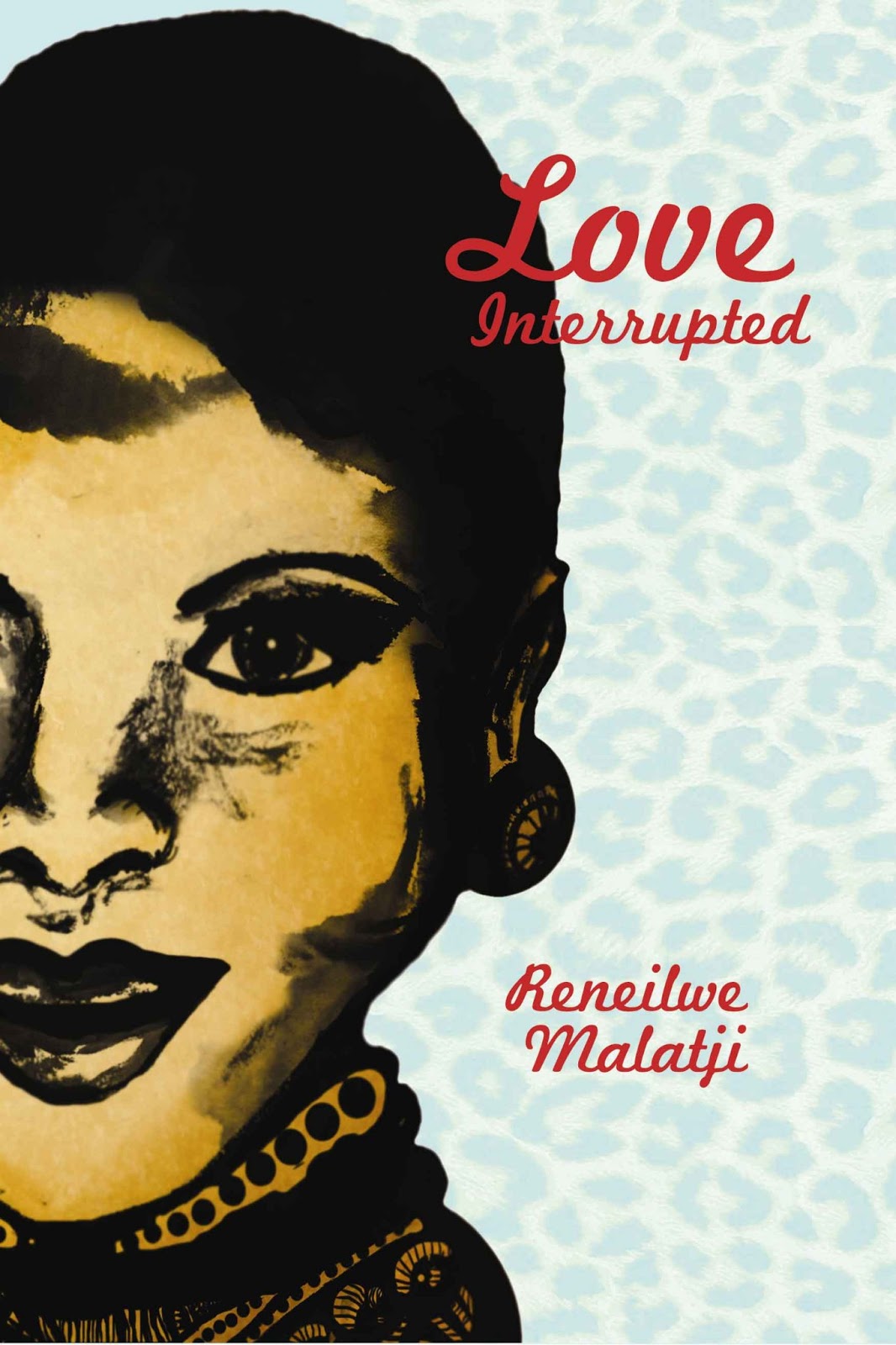 Reneilwe Malatji is on record as saying: “We need stories that are told from the point of view of black people, we need stories from rural areas, we need stories from ekasi, ja genuine sincere stories.”
This debut collection of short stories, Love Interrupted (Modjaji) – written in partial fulfilment of the requirements for an MA in creative writing at Rhodes University – just about fits this description.
Malatji is familiar with the disjuncture between the rural poor and the privileged, educated class, and many of her stories explore the tensions this sets up.
Her strength lies in delineating particular situations, rather than in probing character and motive.
There is little sustained exploration of interiority, and little evidence of formal inventiveness, but the situations Malatji explores are often compromising or disturbing, and centre on dysfunctional relationships, marital abuse, and the irresponsibility of husbands or fathers. (A subtitle for the collection could be, “A good man is hard to find.”) There is, however, a flip side: what is the role of wives or mothers in apparently condoning or tolerating one-sided and often abusive relationships? What price marriage, one wonders?
The title story is one of the most powerful in the collection. Its grimly realistic narrative traces the decline and disintegration of a once-promising marriage between two school teachers.
How could things go so horribly wrong? It would be simplistic to blame any one person or one factor, although traditional expectations clearly have a role to play. The wife is “willing to go with the flow and be a good makoti”, yet, in the end, the story spares no one. All Anna (the wife) is left with at the end is “hope and faith”.

Read more »
Posted by Mary Corrigall at 03:11 No comments: 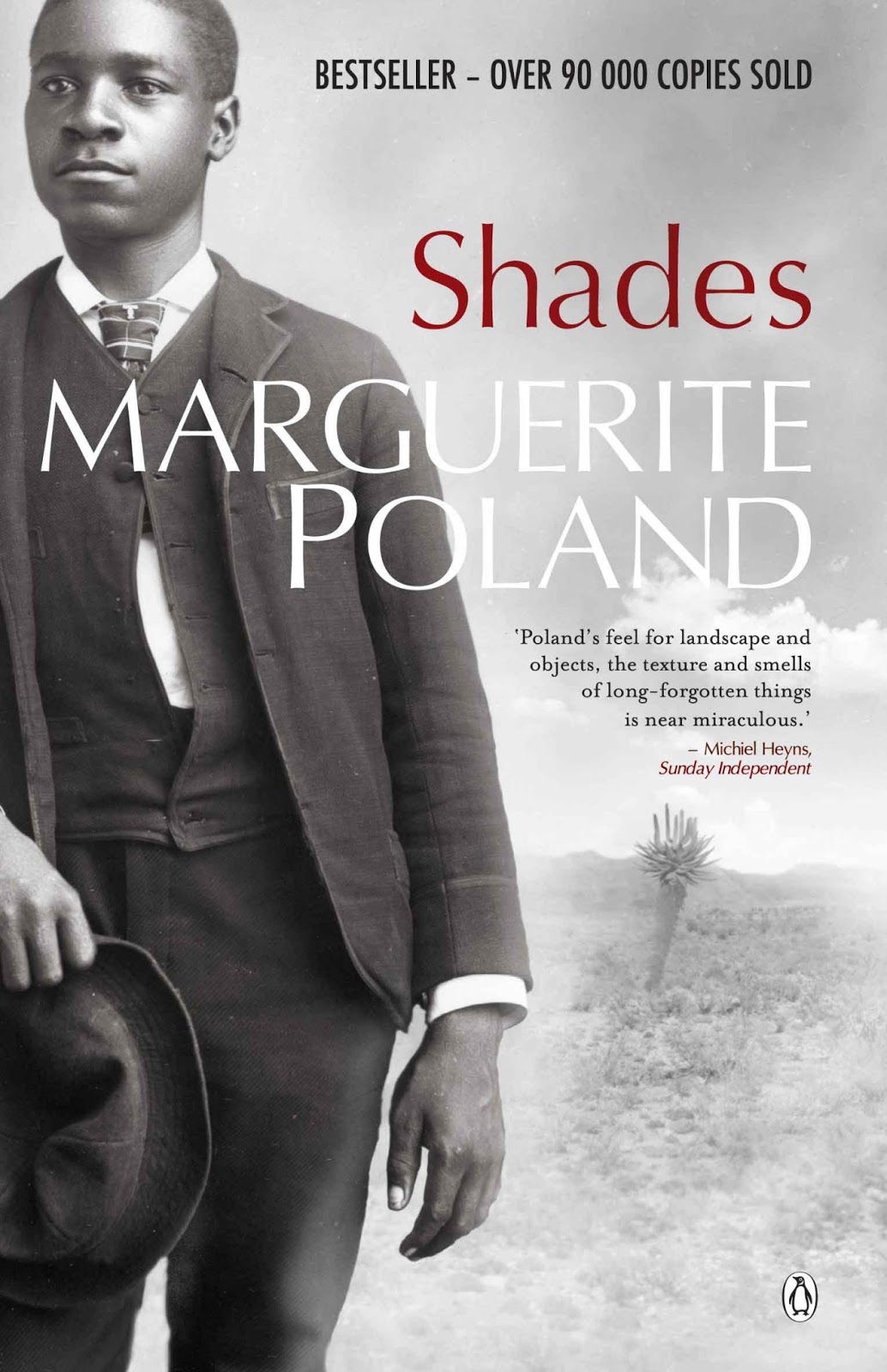 Marguerite Poland's novel, Shades, is a profoundly moving and exquisitely crafted story of love, faith, missionary endeavour, the search for education and identity. It explores the quest for power, in the realm of families, and the broader Christian family at St Matthias Mission in the Eastern Cape. Poland intricately weaves together the lives of pivotal members of the community, principally Father Charles Farborough, who epitomises the dedication of a benevolent missionary, whose selfless devotion to his family and flock exemplifies the finest traditions of the contribution by missions in southern Africa.
He exudes loving-kindness and generosity of spirit, has more emotional intelligence than his wife, Emily; cares deeply about the well-being of his daughter Frances and son Crispin; and is deeply saddened by his failure to breach the barriers erected by his son's depression.
His wisdom and compassion are powerfully conveyed as Poland charts his close bond with Frances. This stands in stark contrast to the fraught nature of Emily's relationship with both her children: the chasm between mother and daughter is unbridgeable; and Emily does not hide her disappointment in her son's poor scholastic record. Thus Crispin and Frances grow up feeling inadequate, in terms of their mother's aspirations. Her devotion is centred on her nephew, Victor Drake.
Poland's masterstroke lies in her capacity to delineate the complexity of her characters in such a way that the reader constantly re-evaluates his or her relationship with them. Emily Farborough's limitations as a mother are rooted in the loss of her first and second offspring and the anguish that characterised the long drawn-out labour that resulted in a stillborn son. Her small stature belies her "titanic will".
Her alienation from Africa is seen in her iconic reverence of "Englishness", symbolised by her love of roses and family china and posset cups. Unlike her husband, whose faith is steadfast and all-embracing, hers is founded on strength borne from iron determination, an unrelenting moral code and hard bargaining with God.
The complex nature of love emerges in the contrasting relationships within families: Charles and Emily's relationship is based on mutual affection and respect. Victor and Frances' bond is predicated on bubbling hormones; Charles provides reassurance for Crispin and Walter Brownley, his former assistant, through gestures, like his heartfelt hugs and handshakes, which speak louder than words.

Read more »
Posted by Mary Corrigall at 02:30 No comments: 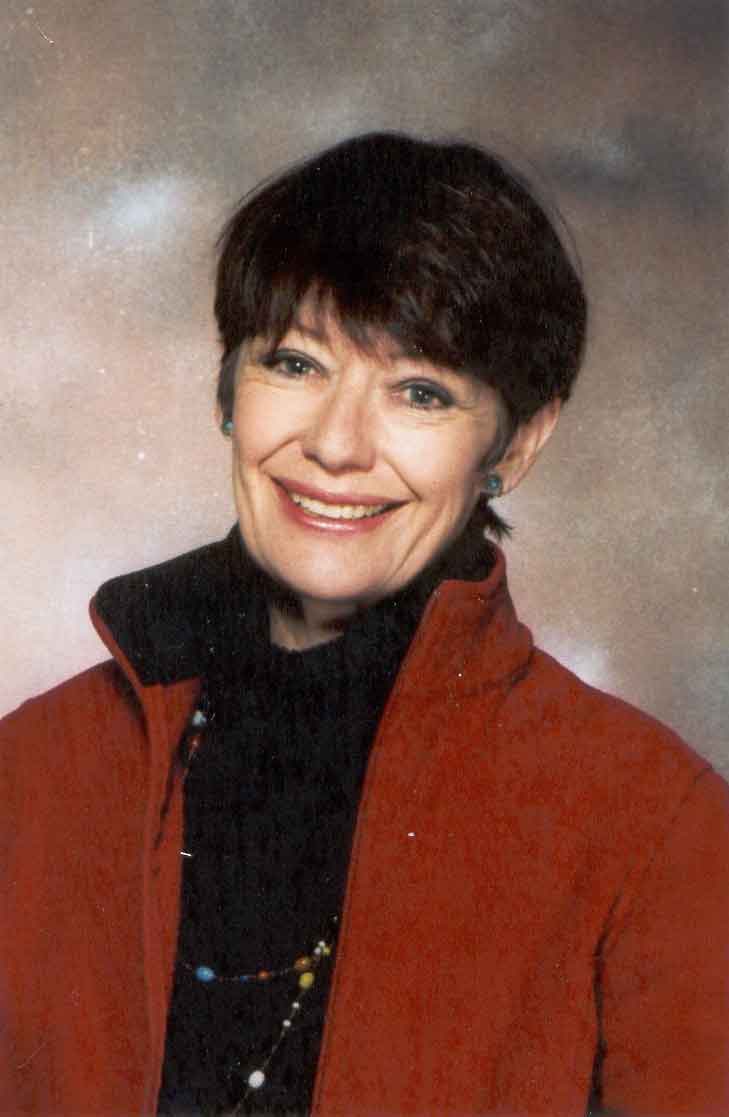 When did you start to write and at what point did you think of yourself as a writer?

I wrote my first book when I was nine. Of course, it wasn't published, but I saw it through and after that continued to "write books" (mostly desperate love stories) until my first |children's story was published in 1979 - 20 years later. I think I only thought of myself as a "real writer" when I saw my first big and serious review - for The Mantis and the Moon.

What was the seed and inspiration for Shades?

I think the seed for Shades was planted when I was a very small girl and met my great-grandmother, on whom Frances, the heroine of Shades, is based. It germinated further when I visited St Matthew's Mission near Keiskammahoek in the Eastern Cape, where my great-great-grandfather had been a missionary from 1872-1913.
Family tradition, stories and lore all contributed. But the real core of inspiration came from my great-grandmother's memoir written when she was in her eighties - a vivid account of life at St Matthew's. This led to intensive research into the period and the place.
I have always been interested in South African history - particularly the history of the Xhosa people, engendered by my study of African languages and social anthropology at university.

What was the main challenge in writing Shades?

The main challenge was getting to grips with the complex and turbulent history of South Africa at the turn of the 20th century and trying to weave it into the intimate story of a particular family without losing the focus of the very personal narrative concerning the protaganists.
I had to explore the events, issues and ideologies which shaped this country at that watershed in its history; the plethora of legislation which disempowered black people; the debate on the role of missionaries; the South African War and rinderpest pandemic and, most importantly, the establishment of the migrant labour system, which changed the shape of black South African society so tragically and irrevocably.

What impact did the writing of Shades have on you and what insights did it give you?

It had the greatest impact on me of anything I have written because, in writing it, I had to examine my own ideology - political and spiritual - and face up to the role that my family had played in shaping institutions - missions and the migrant labour system - which had such a profound effect on society.
I suppose it made me assess more clearly what it is to be a white South African - to understand the legacy I inherited and to meet the challenge of transcending that history.

What are you working on now?

I am working on a novel which has taken rather too long to germinate because of other responsibilities.
But as I have just launched Taken Captive by Birds, which has been such a happy collaboration with Craig Ivor, the artist, I am not too desperately stressed by the lag.


Posted by Mary Corrigall at 02:25 No comments: