When the safety net is removed: Wolf, Wolf

Mattheüis Duiker walks into his father's study and cannot help but aspire to this as the domain of private reflection and exclusively masculine exchange.  In Michiel Heyns' English translation of Eben Venter's novel, Wolf, Wolf (Tafelberg), Heyns captures this pleasure, as well as the emphasis placed in the original syntax of the Afrikaans version. Mattheüis' father is dying, and the house will be part of his inheritance, "His, the study will be." This symbolically imbued space, positioned in a Cape Dutch house in Cape Town's southern suburbs, epitomises the Afrikaner patriarch, Benjamin Duiker's wealth. 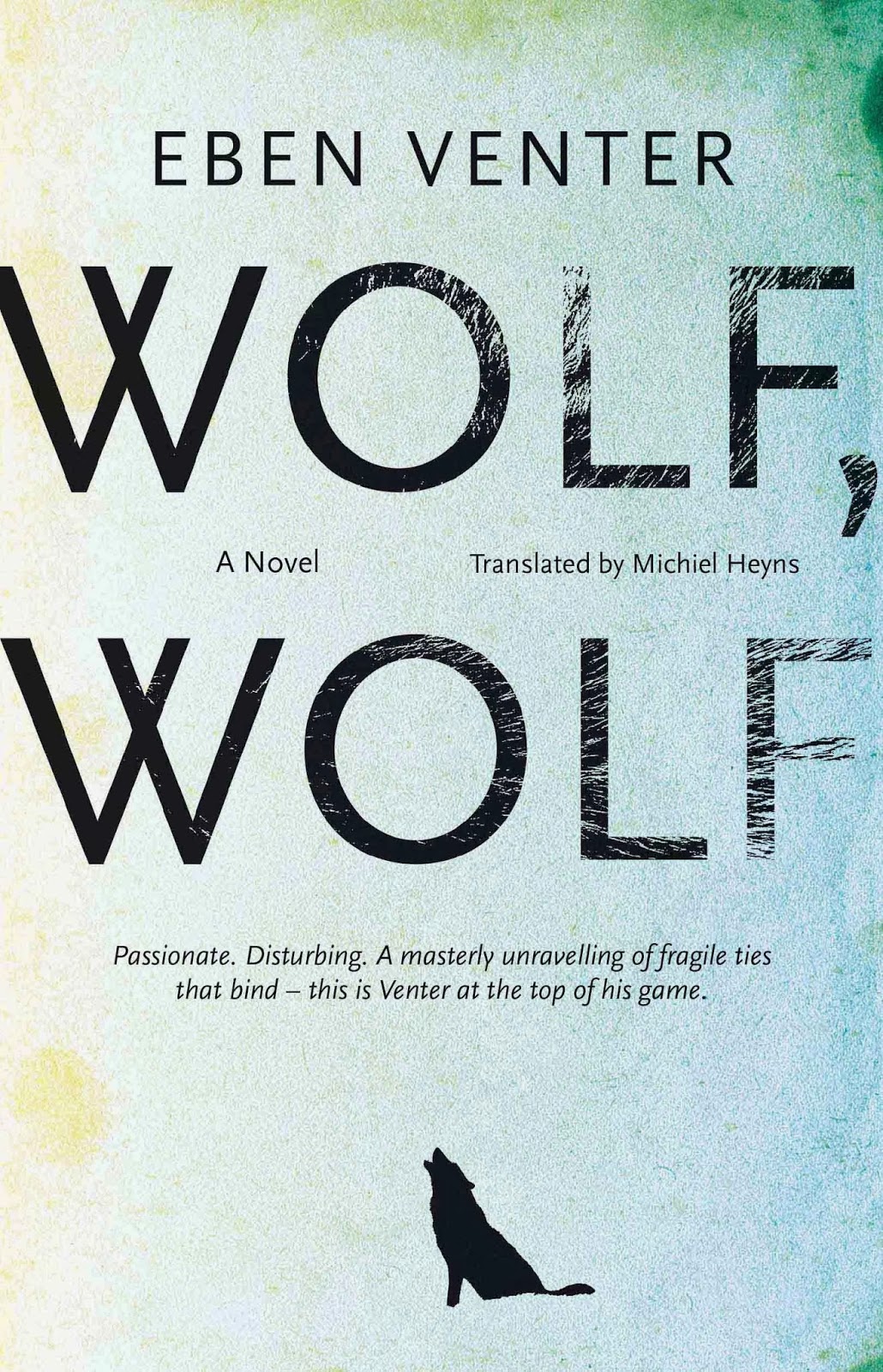 A comfortable and secure prospect; though as Mattheüis is apt to point out, he will have to change aspects of the house to fit with the changing identity of Afrikaners in post-apartheid South Africa - "The Battle of Blood River picture, that can be chucked out".
This painting reappears throughout the novel indicating issues surrounding Afrikaner inheritance. In Afrikaner nationalist mythology, the Battle of Blood River was used to legitimate Afrikaners' role as an independent and politically dominant group in South Africa. The battle, taking place on December 16, 1838, purportedly involved a clash in which the Voortrekkers were vastly outnumbered by Zulu warriors. It's claimed that Sarel Cilliers made a covenant with God that would secure his people's victory. Because, among overwhelming odds, the Voortrekkers succeeded in winning the military encounter, this event became mythologised as proof of legitimate (because it appeared divinely ordained) occupation and political sovereignty in South Africa. It is no surprise then that Mattheüis, a young, gay, white South African, would want to leave this part of the past and his father's ideological beliefs behind. These ideologies, dated and prejudiced, are effectively the same ones which deny the legitimacy of Mattheüis' relationship with his lover, Jack. At his most accommodating, Benjamin Duiker can only say: "That's your business. But not in my house. I won't allow it. It flies in the face of my principles."

The house, the container of Benjamin Duiker's values and prejudices, is the same one which Mattheüis wants to inherit. This gives rise to a number of issues in the new South Africa: what is to be made of Afrikaner wealth and privilege? Bestowed on the previous generation by discriminatory policies which benefited both Afrikaner material wealth and Afrikaner culture, what is the new generation of Afrikaners to inherit? Can one appropriate the privileges of apartheid and use them to forge a new subject position? Can they be manipulated, changed, and have the core ideologies vacated, as the disavowal of the Blood River painting suggests?
The patriarch's death is a slow one. A significant part of the novel is dedicated to detailing this decline. Benjamin has lost his sight and his internal organs are deteriorating as a result of the chemotherapy administered to fight off his lymphoma. His son, nursing him, experiences both anger and guilt amid the forced intimacy which frailty necessarily effects. These details underlie the miscommunications and painful moments in which both parties hope to secure something of their lives before Benjamin expires.
In this way Venter represents both the anguish and ambivalence of familial passing, and the ambiguous and fraught relationship between Afrikaners and their past. Wolf, Wolf is at times graphic and visceral, but for the most part, remains an emotional and sensitive account of the slow and painful extinguishing of human life.
Within this bleak context, hope is vested in two aspirations: the fast food business which Mattheüis hopes to open in Observatory, and the house, which he is certain his father will pass on to him. This will be the place in which he will start a new life once his father has died.
This allows Venter to dramatise the struggle involved in the desire of a younger generation of Afrikaners to distance themselves from the prejudices and values of their cultural heritage, while holding on to the material legacy it facilitated. As an Afrikaner in the new South Africa, Mattheüis must adapt his inheritance - not only the house, with its emblems of Afrikaner nationalism, but the general way of life and world view passed down between generations. Venter suggests two problems inherent in this action: firstly, the extent to which people are able to choose their inheritance in this way; and secondly, what new values will substitute the outdated ones.

Benjamin considers his son a wastrel, both in his implied refusal to further the bloodline of the Duikers and in his nonconformity to his father's Calvinist work ethic. Beyond this, a pornography addiction and his lover's vacuous and excessive Facebooking, suggest that there isn't much solid ground upon which to forge a new Afrikaner identity. These anxieties are also indirectly manifested through the Afrikaners of Coronation Park. Aunt Sannie, the nosy and manipulative evangelical neighbour of the Duikers, is collecting money for the plight of poor Afrikaners. As she claims in the book, "You know, Bennie, the poor-white Afrikaners near Krugersdorp. They have to make do with tents and caravans (?) There's nothing, Bennie. They're at the mercy of other people's charity. If we from down here don't help them, they'll all go under."
The Coronation Park squatters have intermittently been the subject of media attention for the last two years. The plight of these Afrikaners was portrayed, particularly in the Afrikaans media, as a group of people who had been discounted and "forgotten" by the ANC government. In the novel it is suggested that they must rely exclusively on the Christian charity of the Afrikaner volk.
One may suspect that so much is made of Coronation Park in the novel because it highlights how the economic safety net which apartheid provided no longer exists. Without a government that has a specific focus on Afrikaner interests, the potential for sliding into abject poverty dominates the background of the narrative. In the novel these fears and anxieties pivot on the patriarch's death - a symbol for the dawning of a precarious new era.
The title of the novel derives from a children's game that consists of one person, the wolf, being followed around a garden by a number of other children. A congo-line traverses up and down the lawn chanting "Wolf, wolf, hoe laat is dit?" (wolf, wolf, what's the time?). Each time the wolf responds with an arbitrary time, one o'clock, ten o'clock, until finally the wolf cries "Etenstyd!" (time for dinner!). At this point, the wolf lunges towards the children who have been following and chases them around the garden.
The reference to this game suggests an anxiety about the passage of time, always so neatly portrayed by the passing of generations. Within it, one's environment is portrayed as tending unpredictably towards hostility and danger. Combined with the novel's use of the Blood River myth, this game extends the ambiguity of contemporary Afrikaner identity. At the end of the day, placed under pressure, Mattheüis will end up resorting to the defensive posture represented in his father's painting - the same poses that he ridicules: "terrified Boers with those hysterical plumes of smoke from their guns".
It is for this reason that one of the more difficult aspects of the book is that it broods, slowly fermenting until about 200 pages in, after which the narrative explodes and all that seems to have been repressed emerges - crazed and uncanny. Venter's flexibility and control as a writer is portrayed by his capacity to make the reader face nightmarish levels of absurdity and hysteria along with the subdued conflict maintained throughout the first part of the novel.
Heyns provides a faithful translation from the original Afrikaans, attempting a close approximation of Venter's style. But the English remains incapable of suggesting the heavy paternalist tones of Benjamin's speech and the Afrikaans idioms of duty and community mobilised by Sannie. Venter's achievement in the Afrikaans is partly to expose how deeply these cultural formations run - how they cannot be discounted and disavowed so easily.
The future for Afrikaners amid this ambiguity still shows nascent signs of happiness and integration. Jack, Mattheüis' lover, foresees a bright future envisioned within the Duiker house, "Maybe here with Matt he'll be able to make a home for the first time in his life. Maybe he and Matt can be a family, just the two of them, but still a family, with a house and a garden. A security you can believe in." Venter indicates that this utopian future is not necessarily close at hand. Perhaps aspirations of security and privilege, so reminiscent of those provided by the previous government, is where its fault line is most clearly exposed. - published November 3, 2013